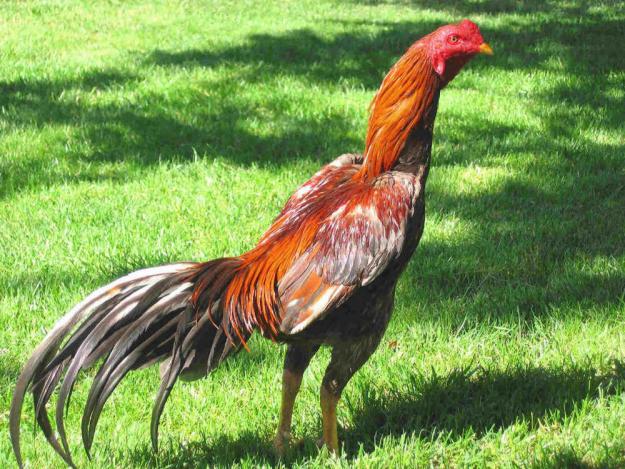 Assels serve as foundational stock for the world’s meat producing chickens. They mature slowly but develop into stocky fowl. With a stout constitution, natural intelligence, and enduring physiology they survive well in free-range conditions. Broody, some chicken farmers have used them to hatch eggs for less broody breeds. They bear confinement well as long as that confinement also includes same sex isolation. Assel hens lay a paltry egg a week–a fact which has lead to their steady decline. Their beautiful plumage, value as foundation stock, and use as fighting cocks has saved this breed from slipping into extinction.

The ancient Assel ranks as one of the fiercest game hens in the world. They will fight for days without end and will fight to the death. Hens fight hens. Roosters fight roosters. Even chicks fight chicks. However, Assel hens treat their brood with unusual tenderness and will protect them from snakes or vermin. Assel owners have even seen Assel roosters protecting the young. Surprisingly, though vicious with each other, Assels prove quite docile in the presence of humans.

Formidable fighters, the Assel has a compact frame, large bones, broad shoulders, muscular hips, and sharp spurs. They carry themselves in an upright stance as if just looking for a fight. Pale, pearl colored eyes stare at their opponents from under a heavy brow reminiscent of birds of prey. Assel’s small pea comb, wattles, and short glossy feathers leave little for an opponent to grab or tear. From their broad skull to their one-of-kind, horizontal fanning tail, the Assel has few if any who can contend with him outside of his own kind.

Assels do well in free-range conditions but will tolerate confinement if needed. Keep the number of Assels in your flock low. Limit the number of roosters to those necessary for reproduction. Keep roosters apart at all times. Make sure the hens have plenty of room in the coop to roost and stay out of each other’s way. Assels can tolerate some cold; however, they need to stay dry. Roosters will fly and even dig to get to another rooster for a fight. Make sure you make the roosters coop secure from both escape and invasion. Only the experienced poultry person should attempt keeping an Assel flock.

“Assel,” an Arabic word, means “pure breed.” India has records of the breed going back 2000 years. However, Assels failed to make it to the West until the mid 1700’s. Most countries around the world bred Assels for cockfighting. Eventually people recognized that the same characteristics bred into the Assels for fighting also produced a stocky bird of substantial meatiness. Crossing the Assel with other breeds produced game birds such as the Cornish game hen and other meat bearing fowl. Today breeders keep Assels primarily for their ornamental plumage. Geneticist argue, however, that mankind would do well to keep their kind around as insurance for the continued production of poultry meat.