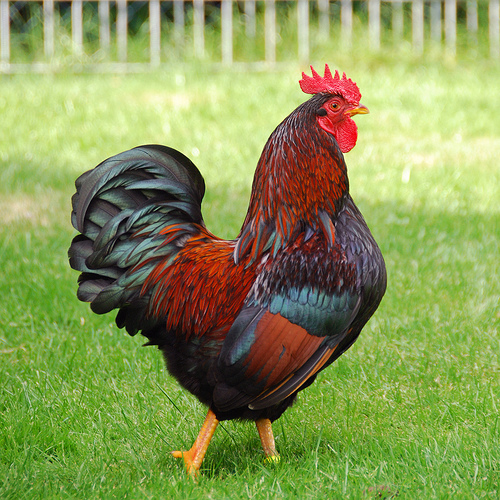 The Barnevelder lays three eggs a week, makes a good meat chicken, and has recently made a resurgence in England as a show fowl. Egg production in the Barnevelder has taken second seat to their meat production and attractive plumage. In the early days of the breed, devotees prized the Barnevelder’s chocolate brown eggs. Today’s Barnevelder produces fewer eggs of a lighter color in favor of the breed’s other admirable qualities. A large fowl, the Barnevelder rooster weighs eight pounds and the female six. The Asiatic and Dutch heritage has created a hardy breed that likes to forage in the run and still get along in the coop.

Most owners classify Barnevelders as quiet, easy going, and even shy. They seemingly like people and children in particular. Enthusiasts report that their Barnevelders will follow them around the yard. They make good parents with the chicks. Even the rooster seems protective of the young. Barnevelders do enjoy their brooding which has prompted some breeders to label the Barnevelder lazy and to recommend mandatory foraging times. A mixed breed of Asiatic and Dutch stock, the Barnevelder has adopted the temperament of the Dutch breeds over the fighting spirit of the Malayan cock.

Barnevelders can have white, black, brown, blue, and blue lace feathers. However, most people associate the Barnevelder with their eye-catching partridge plumage. It has the appearance of contiguous array of black and brown adjoining circles drawn by a rogue geometry class. Breeders accurately describe the plumage as “tight.” The plumage follows the contours of the hen and gives the bird a very orderly, precise look. The rooster, less showy than his female counterpart, sports a black plumage with an iridescent green shimmer. They make a handsome couple.

Even though the purpose of the breed has shifted over the years, the Barnevelder can still provide an adequate supply of eggs into the winter months with layer food and supplemental light. The breed tends to brood and will produce better eggs and meat if allowed allowed sufficient exercise. The Dutch gene supports a fowl that tolerates cold, damp weather well. However, chickens always do better in well insulated, draft free coops. Attend to their shy personalities with abundant human interaction. Let them follow the kids around for some extra exercise and stimulation.

The Dutch called their very successful breed the “Barnvelder” in honor of the district by that name. As it turned out the Barnvelder turned out better than expected and gained recognition as a dual purpose fowl meat and egg producer. In addition, the Barnevelder hen had a pleasing partridge pattern that caught the eye of ornamental fanciers. As the demand for chocolate colored eggs fell out of vogue and other breeds developed layers, the Barnevelder’s original purpose changed from egg layer to meat and plumage provider. Today’s Barnevelder bear little genetic resemblance to the original breed as evidenced by tan eggs in lesser quantities. 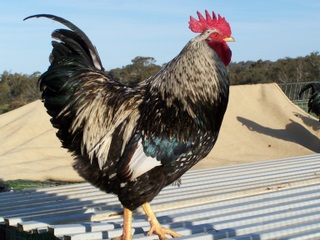