The Jersey Giant weighs in as the largest purebred chicken in the world. A Jersey Giant capon can reach twenty pounds. Unfortunately, it takes six months for the Jersy Giant to grow its giant skeleton and another three months before it has sufficient bulk for butchering. Their slow maturation rate make them unviable for commercial meat production. Jersey Giants lay three extra-large, brown eggs a week. They will brood chicks; however, their massive size often leads to crushed eggs or chicks. In spite of their size, Jersey Giants fit well into a small farm setting. They have a hardy constitution for cold.

The Jersey Giant chicken has a docile disposition. Owners label them “sociable.” They seemingly like other animals on the farm. The cocks show less aggression than other breeds. Jersey Giants tame easily, eat out of a human hand, and run toward a person for a good petting. They do well in confinement. Jersey Giants make great pets; however, small children may feel intimated by their shear size. Jersey Giants like to brood and make good mothers. Unfortunately, they often accidentally crush brood under their massive frames.

The American Poultry Association (APA) recognizes the Black, White, and Blue Jersey Giant. The most common Jersey Giant, The Black, has a solid black plumage with a green hue. They have a large red comb of the single configuration, medium red wattles, and medium red earlobes. Black Jersey Giants has a yellow carcass covered by their plumage but visible on the bottom of their slate gray feet. The Whites look like the Blacks except they have white feathers and yellow legs. Blue Jersey Giants, just recently accepted by the APA, have grayish blue feathers with a dark lacing and black hackles.

Jersey Giants need more space in every category including the entrance hole to the coop. Make perches and nesting boxes big enough to accommodate adult fowl. Jersey Giants like to forage. Provide them room to roam. You can use a low fence as Jersey Giants have little ability or inclination to fly. Give your chickens plenty of good layer food. Limited food can limit their development. As mentioned above, Jersey Giants can accidentally smash or trample brood. Use an incubator. Jersey Giants typically take an extra day or two to hatch. Be patient.

Jersey Giants went by the name Black Giants originally. The chicken’s name came from their breeders, John and Thomas Black, who developed the breed between 1870 and 1890. The name later changed to Jersey Giant to honor their place of origins. The Black brothers wanted a chicken that would challenge or even replace the turkey. They came close. They crossed Black Javas, Black Langshans, and Dark Brahmas to produce the Jersey Giant. The American Poultry Association recognized the Black and White Jersey Giants in 1922. The blue variety came on the scene in 1981 and earned acceptance in the Standards of Perfection in 2003. 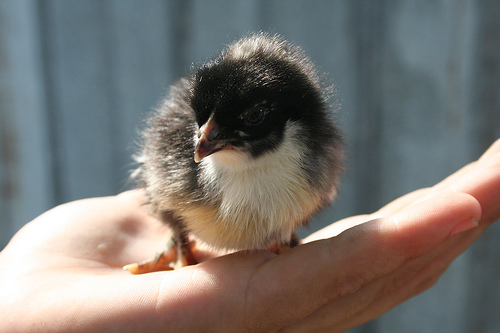 How Not to Care for Chickens
Are You Raising a Cockatrice?
Lakenvelder pictures, video, information and chicks.