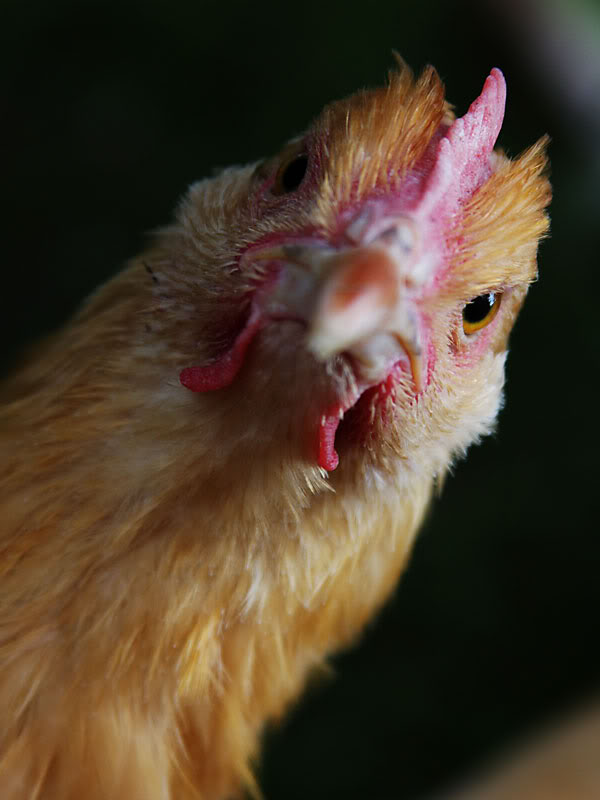 We can all draw a chicken with minimal effort by the time we’re in kindergarten, or at least picture one in our head. We can see their beaks, the red doo-dad that hangs from their neck. The other red doo-dad that comes out the top of their head. Um…yeah what the heck are all those things? Well, let’s stop for a moment and answer some of these questions about strange chicken anatomy.

The red appendage that seems to sprout from the top of most chickens’ heads is called the comb and comes in a variety of shapes and sizes, some of which are the defining characteristic of the various breeds. You can find V-shaped combs, rose-shaped combs, buttercup-shaped combs, and even strawberry-shaped combs. They can also come as a single comb or be split.

But what’s really interesting is that the comb is used not just as decoration, but as a means of cooling the chicken off. Yup, those red parts on the top of the head are actually miniature air conditioners, to some extent.

The opposite of the comb is the wattle, the usually red appendage that dangles under the beak from around the chin. Like the comb, they come in a variety of shapes and sizes, sometimes being nearly absent altogether. They, too, function as a means of air conditioning and actually work in conjunction with the comb. Blood circulates between the wattle and the comb and in doing so, the chicken can be warmed or cooled. Plus, they just look cool!

Chickens are birds, and birds have beaks. With chickens, their beaks are particularly small and built to peck and crunch smaller items, such as seeds and insects. The natural formation of a chicken beak is that of a point, though it’s common practice to perform what’s known as a “debeaking,” which isn’t actually removing the beak but rounding the tip out to prevent the chicken from harming other birds or its young. This is particularly common with hens used for breeding and egg laying.

Again, since chickens are birds, they have talon-like feet. Most chicken breeds have feet and legs that are devoid of feathers, though some breeds, such as the Sultan, do actually have feathers throughout their feet and toes. There feet are shaped the way they ate to allow for the birds to easily scratch at the ground in order to stir up bugs. It’s just all part of the peckin’ and a scratchin’.

Chickens are rather unique farm animals and have a very iconic image. They may seem strange, but all those features are actually rather useful indeed!